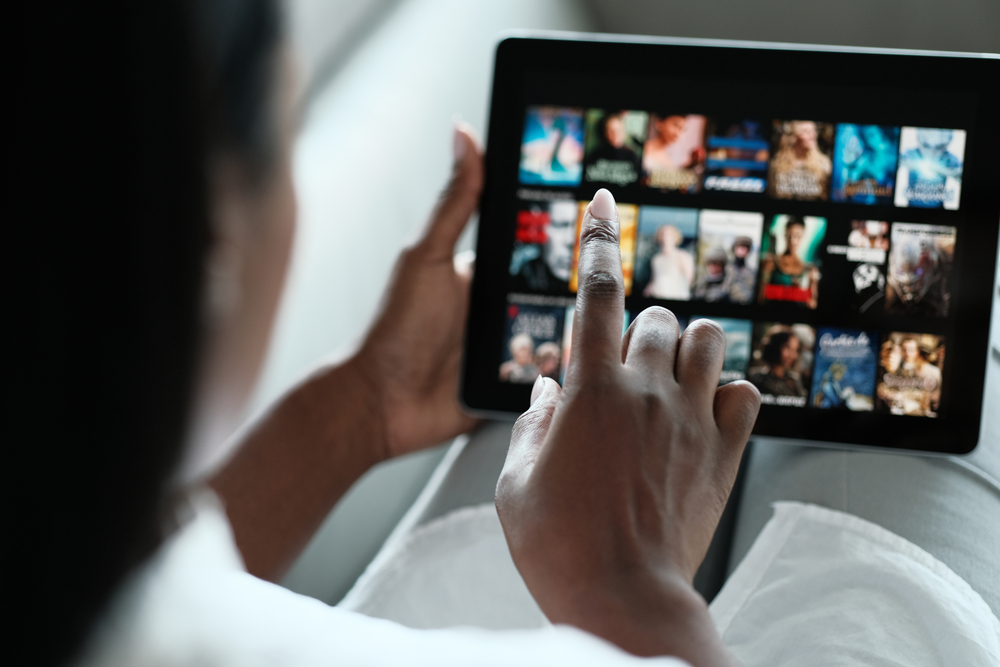 Survival shows have become ever more popular on Netflix in recent years. Whether it’s people wanting escapism from the Covid-19 Pandemic or others wanting to learn how to survive in the wild, survival movies and series have been drawing millions of viewers.

You don’t want to waste your precious time watching badly made or unrealistic survival shows – especially if you’re a survivalist yourself, you’ll be screaming at the TV! Instead, we understand that you want to watch, and learn from, the best survival movies and series out there.

We’ve worked hard to find you creative and relatable portrayals of survival alongside some of the most educational and interactive survival shows available. We’ve scoured the best shows on Netflix so that you don’t have to.

It’s sometimes difficult to find a good movie to watch and it can get frustrating searching through endless options. We’ve helped you pick a good one by doing the background research and offering you our top 5 survival movies on Netflix:

OK so let’s start with an apocalyptic survival movie. If you’re a fan of them then you’ll love this thriller featuring Sandra Bullock, Trevante Rhodes and John Malkovich.

The basic story is that invisible entities have caused people to commit suicide in the most unhinged ways and the lead character, Malaroie, is pregnant and right smack in the middle of it all. The worst part is, not only do the characters have to worry about seeing the entity, they also have to deal with individuals who have actually gone insane from the entity and are forcing anyone they meet to succumb to the entity’s corruption.

The plot in this film allows us to watch how each character approaches this “new world”. The film realistically depicts the complexities of forming alliances with strangers, the fragility of trust and very true-to-life heart wrenching decisions we may have to make in survival situations. We see the lengths characters will go to feed themselves and their loved ones, from looting to seeking shelter and improvising communication and traveling methods to survive.

Birdbox does an excellent job at depicting how different people approach calamities when SHTF and left me reflecting on the importance of our survival communities.

Survival Situation: Surviving an apocalyptic world without a community when SHTF

Cloverfield? Wait – isn’t that about aliens?

Don’t worry. While this movie is part of the Cloverfield franchise, it’s only loosely related to the other installments. There are very few sci-fi elements in this film.

Preppers will appreciate the setting of this film, which takes place almost entirely in a doomsday bunker. We think they’ve got the details of the bunker spot on – including airlocks, air filtration systems and even a mini underground garden.

Survivalists will love Michelle, the main character, and her resourcefulness as she fashions weapons out of a wooden crutch, a hazmat suit out of a shower curtain and more.

I particularly liked the explanations of John Goodman’s character about an enemy force’s strategy to wipe out a population, beginning with a chemical attack. It was a good reminder that our fears are not unfounded. That sometimes our community’s “paranoia” is grounded in real-world happenings and truth.

As with other apocalyptic films, a big part of the films is about the distrust that the main characters have of one another. This time though, there’s the added pressure of having to forcefully bond within the confines of a bunker.

It’s certainly food for thought about being selective of who we bring into our bunker and what to do in the very real scenario where we might not get along.

Survival Situation: Living with each other in a bunker during a chemical attack.

Directed by Icelandic actor Baltasar Kormakur, this is an American drama following a female sailor encountering a hurricane.

With only the buoy remaining of her entire boat, this is a tale of ultimate survival against the elements and everything the natural world has to throw at us.

This is a suspense filled movie that has an endlessly twisting plot line.

Survival Situation: Surviving on a yacht in the middle of the ocean

One of Tom Hanks’s most iconic films, Castaway sees him (as ‘Chuck’) stranded on a desert island after a crash landing.

Based on an island in the South Pacific there’s a background love story with Helen Hunt (‘Kelly’) whilst survival becomes the key priority. We see Chuck quickly learning the importance of finding food, water and shelter as well as figuring out how to build the best fires.

As time passes, Chuck must figure out how he will be rescued – but there’s a bigger question of whether he really wants to return to his old life.

Survival Situation: Being stranded on an island

In this true story of the final moments of Chris McCandless’ life (may he rest in peace), we become acquainted with the thoughts that were going through this young man’s mind as he gives up his worldly belongings to risk his life by surviving in the Alaskan wilderness.

If you’ve heard of McCandless, you might appreciate the backstory leading up to his fateful adventure. If you’re like us and were looking for just the survival element though, you might find the flashbacks unnecessary. Luckily though, McCandless’ time in the wild is peppered throughout the movie.

While we felt sorry for the loss of such a beautiful young life, we found ourselves shaking our heads at how unprepared he was – from not having proper navigation tools, proper shelter (he tries to keep warm in a metal bus), sufficient food, comms – we could go on.

For us, the story was a very sobering reminder about what can happen to people that don’t give the wilderness (and the dangers within) ample respect. Chris ultimately dies from eating posoinous berries.

It was also an encouraging reminder that the knowledge that our community shares – is POWER, and that it could save our lives and the lives of our loved ones some day.

Another takeaway for us was that it was safer to build up food stocks now, rather than rely on gathering food in the wild (because it’s hard, very HARD).

Survival Situation: Surviving in the wilderness, and the dangers of being underprepared.

Survival series are always a popular choice on Netflix and viewers love getting to know the cast and characters on a weekly basis.

There are the more obvious mainstream, commercial series such as Survivor but there are also lots of brilliant series that include incredible footage and helpful survival tips.

Bear Grylls is ex British Special Forces and he’s become a household name now on both sides of the Atlantic for his survival tips, shows and products.

The general format for the shows sees Bear Grylls stranded in remote and inhospitable regions including The Rockies, The Alps, The Moab and the Savannah Desert. He gets out of some pretty remarkable situations and viewers can’t fail to be impressed.

The series is also useful for those wanting to start off learning some useful survival tips for future adventures – and there are a few celebrity appearances to enjoy too.

Based on the winter trappers living in the icy tundra at the Yukon Alaska border, this is a survival series with a very real back story.

The 8 part series follows the trappers as they keep themselves alives in temperatures as low as -50 degrees fahrenheit. Not only do they battle the extreme cold, they are also battling predators and the difficult terrain.

There’s so much to learn here – from the mental and physical challenges of surviving in such tough conditions, to the techniques and methods used by this incredible community.

Hosted by the popular TV personality Steven Rinella, this is a series which focuses on surviving starvation. It’s based on the idea that all supermarkets shut down, your cupboards are empty and you’re left to fend for yourself.

Set in diverse remote locations in New Mexico, Australia and British Colombia this series has been renewed for a seventh series.

The episodes are 30 minutes each and focus on hunting a different type of animal in each location. There are some excellent tips on hunting as well as the preparation and cooking of wild animal meat.

Replicated around the world, the US version of this show sets contestants challenges and obstacles to overcome in a remote location. They must compete against each other to win the title of Sole Survivor.

Contestants are responsible for providing food, fire and shelter in the isolated location they are left in as well as competing regular challenges to win points.

Whilst some survivalists may think this is too commercial an option, there’s lots to learn and it’s easy watching for anyone with an interest in the human instincts and fight for survival.

Survival Situation: Surviving on an island

This is for the hardcore survivalists who want to learn as much as they can about different techniques and methods. Survival expert Ray Mears is world renowned for his informative and humble approach to the great outdoors.

In this series he tracks three different predators in their natural environment – from a pack of wolves in Idaho to a family of leopards in Namibia.

If you enjoy this series, you’ll love the books that Ray Mears has written including several focusing on bushcraft survival and wild food.

Survival Situation: Travelling through the wild

What Is The Most Realistic Survival Show?

There are some great survival shows that give a realistic insight into some of the world’s most remote locations and toughest conditions.

Out of the Wild is a reality survival show that features 4 teams of professionals from urban areas. In the first two series, the contestants are dropped off in Alaskan back country and in the third series the setting is Venezuela.

This is a survival show that requires contestants to make use of every survival skill they know in order to make it to shelters where they will live and work. They are required to live off the land using minimal resources – hunting animals such as moose and mountain goats.

Alone is another close to reality survival show. It’s self documented by the 10 individuals featured, surviving alone in the wilderness with only a limited amount of survival equipment. There is no communication between the contestants who are left completely isolated apart from medical check ins.

The settings for Alone are usually on indigenous controlled lands in stunning locations such as Mongolia, Vancouver Island  and Argentinian Patagonia. In the 2020 series, participants attempted 100 days of survival in the Arctic in an attempt to win $1million.

You can also consider checking out some of the best and most realistic footage for survivalists and preppers on YouTube and smaller channels.

There are lots of survival shows that are extremely useful for learning both basic and advanced survival skills and it’s a fun and engaging way to pick up new techniques.

We’ve created a short list of some other realistic survival shows we’ve enjoyed:

Survival films can teach us about incredible events and places in history and in other parts of the world. Survival series are a great way to engage with survival experts and contestants learning to navigate isolated and tough environments.

We hope you find something to enjoy from the comfort of your couch – happy watching!