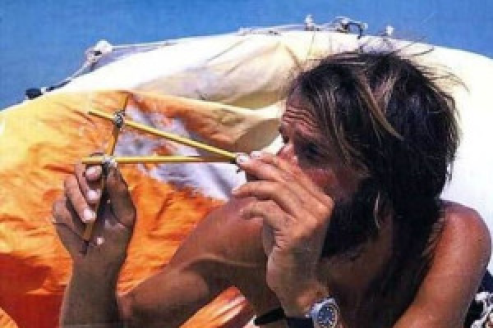 Hello, my friend and welcome back!  Today I have a great post for you from Chris Browning and it’s a good one.  He is the editor of Gun News Daily – www.gunnewsdaily.com.  It’s longer than what I usally post,  but well worth the effort.  The best way to learn to survive is to learn from those who have had to fight to survive already. Their stories and insights provide the best training you can get.  Grab a cup of coffee my friend and have a seat while we visit.

3 Incredible Stories of Survival: What We Can Learn From 3 Men Who Beat All the Odds

As terrifying as this may be to a prepper, when you are out in the wilderness, it is truly impossible to be 100% prepared for anything that could happen.

No matter how much you pack, read, and train prior to an expedition in the wild, sometimes fate takes over and everything you thought you knew becomes useless.

Does this mean that when something unexpected happens when we’re out in the wild, we should give up? Of course not.

Although you never know what could go wrong in the wild, survival is possible if you remember to remain calm and focused.

Enjoy these incredible stories of survival against all odds to remind you that although you can’t be prepared for every situation, the will to survive is the strongest power that a human possesses.

Steven Callahan, an experienced sailor, set out on a solo sail in the middle of the night one day for what he thought would be a usual expedition. Everything changed, however, when a whale bumped his boat.

The boat sunk to the bottom of the ocean, and Callahan found himself left with only an inflatable raft and a small amount of water and food. Callahan’s previous experience sailing on the ocean could never prepare him for the next 76 days.

Callahan had to battle a bright sun, dehydration, and shark encounters. He faced disappointment after the seven flares he shot at passing ships were not seen.

How did Callahan survive 76 days, alone and hungry, without going crazy?

Dorado fish swam around Callahan’s raft constantly and provided comfort and a sense of togetherness for him. Callahan began to refer to them as his “doggies.”

One of Callahan’s “doggies”.

Miraculously, after 76 days and 1800 miles floating on the ocean, fishermen finally found and rescued Callahan.

Callahan’s incredible survival teaches preppers that even if you are completely unsure how to handle a situation, take a moment to find comfort in the things around you.

Finding a calming presence against all odds may keep you sane and save your life.

Ricky Megee: Alone in the Outback Ricky Megee woke up one day in the middle of the Australian Outback with no food or water. He was completely alone and unsure of how he got there.

Megee believes that his car was stolen by three aboriginal men who drugged him and dumped his body, leaving him for dead. Megee woke up in a shallow grave that had been dug for him.

He had no resources available to him. Megee ate any food that crossed his path, consuming frogs, leeches, lizards, and cockroaches whenever possible. He was able to find a dam with water that he could drink in order to avoid dehydration.

After 70 days of struggling to remain alive, Megee was finally found by farm hands. He was completely emaciated due to his limited diet, and had lost over half of his body weight. Ricky Megee after being found.

The men that took his car and left him for dead were never found.

Ricky Megee had no way of being prepared for what would happen over the next 70 days when he awoke in the middle of the outback. And yet, against all odds, he survived.

This is an important example of the triumph of the human spirit. No matter what is thrown at us, we can survive.

The will to survive is always stronger than the will to give up. Despite how hard, or even impossible, a situation may seem, remember that you can and you will survive if you simply never lose hope. Greg Barnes was only 28 when he was swept off of a rock and out to sea in Guam.

He was gripping a rock, allowing the waves to crash over him and the spray to hit him, when a large wave took hold of him and dragged him out to sea.

Within seconds he was 100 feet from the shore.

He immediately used all of his strength in an attempt to swim in towards the shore, and yet the tide was too strong. Barnes stopped and realized that he was acting purely on his panic.

He remembered his scuba training and began kicking his legs with little effort in order to stay afloat. He desperately kicked and kicked, attempting to remain above the waves.

After 30 minutes of relentless kicking, he felt ready to give up. His clothes were sagging, his muscles were aching, and his hope was waning.

He thought about giving in and letting go.

However, he couldn’t bear the thought of looking like a hypocrite to the youth group he taught. He had always reminded them of the importance of suffering and the strength that comes from it.

A naval helicopter flying overhead passed him over once, and then twice before seeing him.

As rescue divers pulled him up towards the helicopter, all Barnes could think was that it was a miracle that he was alive. Barnes’s story reminds us of the triumph of the will to live for the sake of others. It also reminds us to persevere even when you feel like you truly cannot go on any longer.

Most importantly however, Barnes reminds us of the danger in panicking in a scary situation. Whether you’re alone in the wilderness or at home defending yourself against an intruder, the lesson is the same: stay calm and keep your whits about you.

Barnes was out at sea alone with no resources, no equipment, and only fear to accompany him. And yet he was able to remain calm when necessary and focus on surviving.

Panicking simply wastes time and expends energy. If you are in a terrifying situation, and you feel yourself beginning to panic, remember to take a deep breath and remind yourself that you can survive anything if you simply focus.

It could save your life.

These stories of survival are chilling and terrifying. We never want to imagine that we will be in a situation that is completely out of our control.

And yet, even when we have lost all hope and all control, we can survive. We do survive.

Against all odds, we can survive.

The will to go on, to continue, and to succeed is so strong that it trumps the will to give up, to rest, and to take the easy road. We fight the odds with incredible strength because we truly want to survive.

Incredibly, we almost always come out stronger on the other side.

No matter how unprepared you may be for a situation, remember that you can and will survive it.

Take a deep breath. Find comfort in the things around you, and allow them to calm you and assist you.

Remind yourself of your incredible will to survive.

You will carry on.

Well, that’s it for today my friend and I hope you have enjoyed this, our final guest post.  Until next time, stay safe, stay strong and stay prepared.  God Bless America!